We are leaders in the manufacturing of rims and wheels for all types of cycling: from traditional to extreme and trendy riding disciplines.

The heritage and the experience built over decades within the cycling world materialize in our innovative products, customizable and equipped with components that boast the highest technology together with eye-catching design and style.

A brand of excellence ‘Made in Italy’, present at 2016 Rio Olympics to support the Italian triathletes Anna Maria Mazzetti and Charlotte Bonin.

What we believe in?

Currently, we employ cutting edge technology to manufacture products that are unique and offer the highest levels of performance, durability, speed and reliability. What is our philosophy? Ultimate performance in absolute reliability.

The catalogue by Ambrosio showcases specials rims for e-bikes, designed to withstand increased weights. The emergence of electric bikes as a means of transportation and our environmental awareness has led us to manufacture rims with specific technologies.

We have established partnerships with leading companies in their own fields in order to achieve a fruitful exchange of technologies and management tools, adapting the industry standards to the needs of market and customers, on behalf of  ‘Made in Italy’ excellence.

Born in 1932, we became established at an international level as manufacturers of rims and handlebars.

The biggest credit of course goes to the riders, but it is worth mentioning that our wheels have triumphed over a variety of terrains, fighting on the cobbles of the Paris-Roubaix and over the impossible gradients of the cobbled climbs at the Tour de Flanders.

Los Angeles 1932 Olympic champion Giuseppe Olmo was the first great cyclist to use our handlebar for road bikes; with that very same component, he dominated ten stages of the 1936 Giro d’Italia.

Later on, the Ambrosio Champion handlebar led the invincible Fausto Coppi to a number of wins. In the following decades, most of the all time big names built their bikes using our rims and wheels.

The full list of champions would be too long, but it seems only right to remember the legendary Moser, Saronni, Hinault, Armstrong, Raas, Zoetemelk, LeMond, Bugno, Chiappucci, Argentin, Fondriest, Martinello, Tonkov, Freire, Bettini, Simoni and Scarponi.

These are athletes who have won the Tour de France, Giro d’Italia and Vuelta a España, beside a never ending collection of World Championships and of course a number of Classics.

What could we really add to this?

In addition to the hour record set by Moser, many cyclists ‘of ours’ took incredible wins on the track. Amongst them, Graeme Brown and Brett Lancaster; Olga Slyusareva from Russia at the 2004 Athens Olympics; the road champion Giorgia Bronzini from Italy at the World Cup in 2010 and 2011. 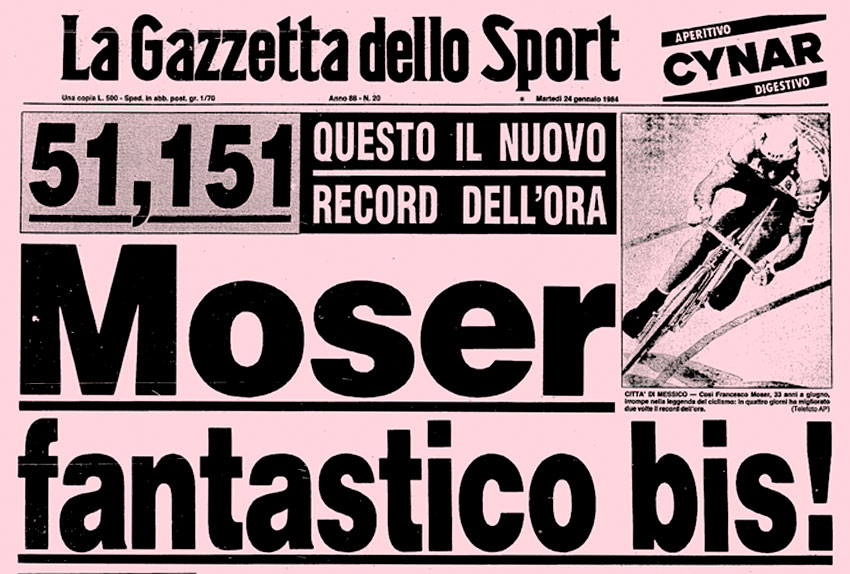 What is the win we have closest to our heart?

Every win has been able to give us endless emotions, but the hour record set by Francesco Moser in Mexico City and Stuttgart – also thanks to our disc wheels – remains perhaps at the top of our list.

Disc wheels have represented one of the greatest technological leaps in the history of cycling. In this regard, we have ourselves made an important contribution.

On 19th January 1984, “lo Sceriffo” [the Sheriff] from the small village of Giovo, demolished Eddy Merckx’s previous record with a distance of 50.808 km on the Mexican track. Only four days later it would be raised to 51.151 km, a record that remained set and unbroken for nine years.

No bikes with ‘filled’ wheels had been seen before. From that moment, they became indispensable for any cyclist pursuing maximum aerodynamic efficiency.

In 1988, during the last international appearance of his career – and again choosing Ambrosio – Moser set the indoor hour record in Stuttgart velodrome with a 50.644 km, defeating the Russian Ekimov and the existing record distance.

Ultimate performance in absolute reliability: this is Ambrosio.